By Anne Felicitas, Editor at AdvertiseMint, a Facebook advertising agency

Like I said, Google is an example of paid search advertising. Marketers pay Google to appear in search results, choosing keywords relevant to their businesses, hence the word “search” in “paid search advertising.” When a user enters Google and searches for “brown loafers,” the marketers who bought Google ads for those keywords will appear on top of the search results for that query. Examine the example below. 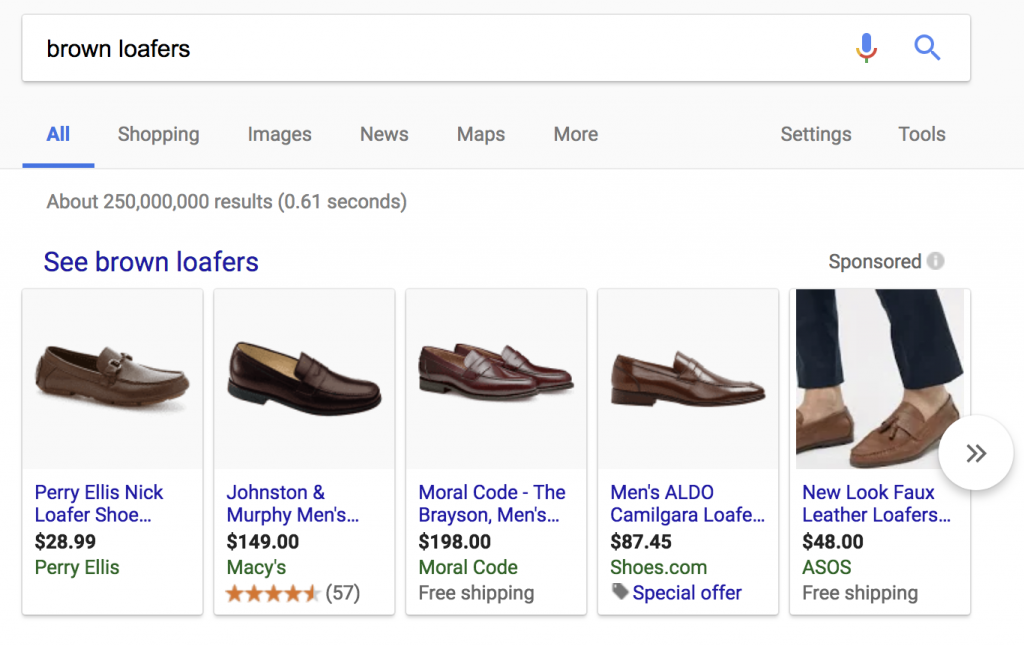 Facebook, the opposite of paid search, is an example of social media advertising. Because it is not a search engine like Google, it cannot offer the same search tools and the same ads as Google. Instead, marketers pay Facebook to show ads in its social media platform, hoping that the ads will attract the eyes of Facebook’s 2 billion users as they scroll through their feeds. The ads can appear in Facebook’s news feed, right column, or Audience Network, depending on the placement options you choose. Here are examples of Facebook ads appearing in the news feed and in the right column. In the middle of the screen is a single image news feed ad from Shein, and the right column ad, which you can see from the right side of the screen, is a single image ad from Santa Monica College. 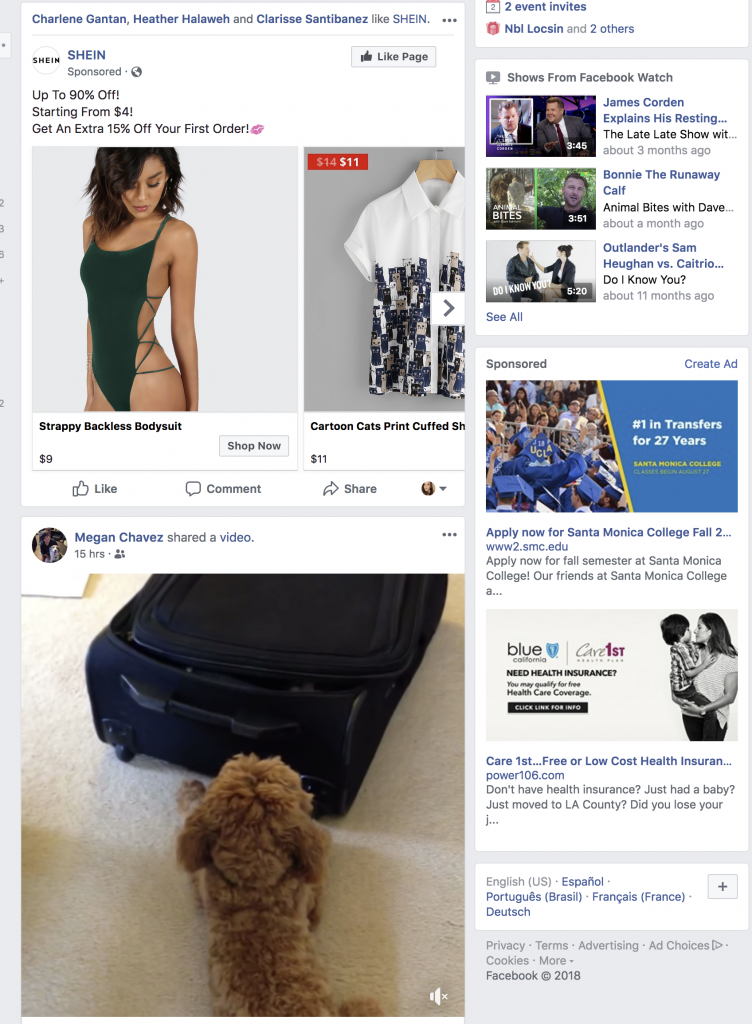 As you can see, Facebook ads not only appear differently than Google ads—the environment in which they appear is different too. To succeed in paid social advertising, you’ll need keep the following tips in mind.

The users who visit Google to search for items have high intent: they have an item in mind they want to purchase, and if they find the item, they will likely purchase it immediately. Users who visit social media platforms like Facebook and Instagram don’t share the same intent. In fact, the don’t have any purchase intent at all. Rather, they visit the platforms to socialize with their friends and seek entertainment from the content on their feeds.

If you want to appeal to a social media audience, you must ditch the sales talk and speak to them as though you were a friend from their feed. The more your ad looks less like an ad and more like a post from a peer, the better your ad will fare on Facebook. Remember, people on Facebook don’t want to see ads. They want to see posts.

If you don’t know the kind of approach to use, try the three Es: using your ad, entertain, educate, and engage. Look at the Sugar Bear Hair ad below. The ad educates users about the substance pectin. Instead of opening with a call to action “Buy our products now,” the ad first introduces a fun fact about the product. 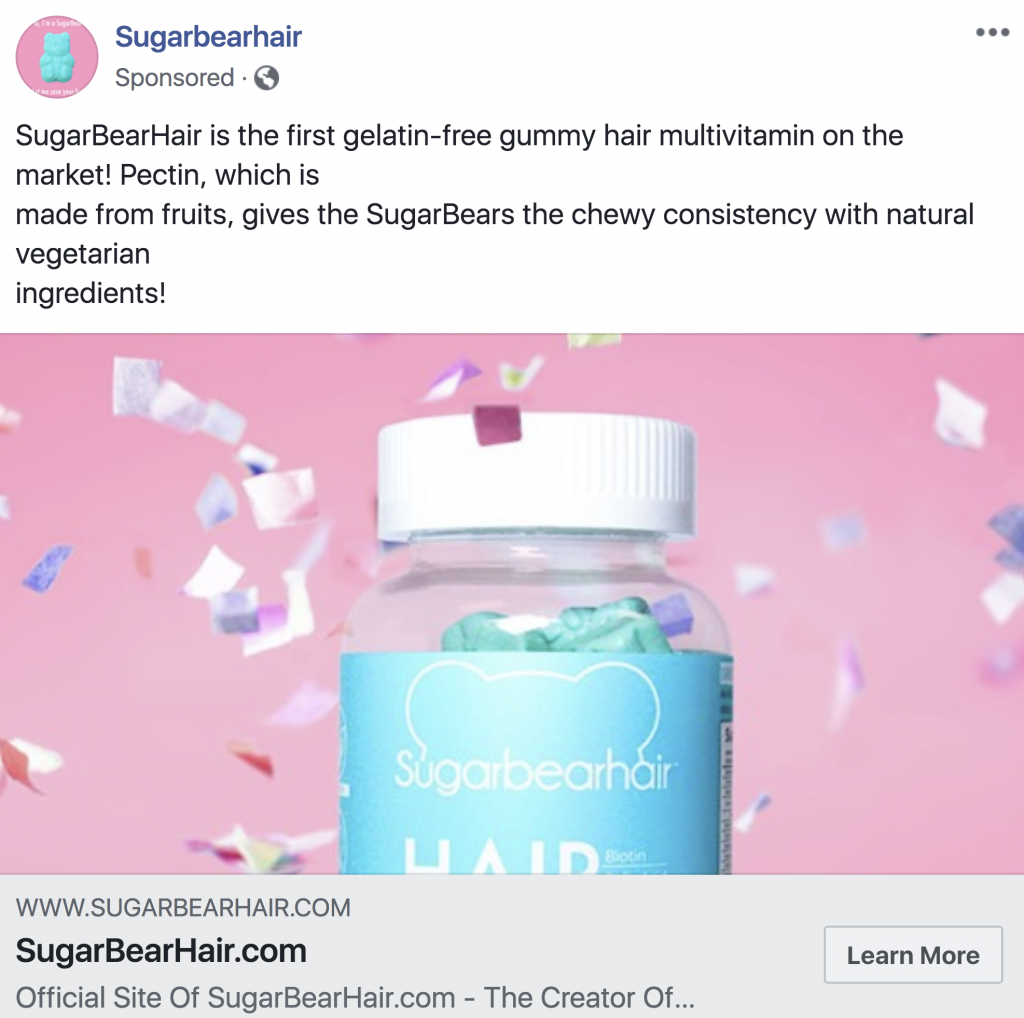 You’ve probably heard this advice so often you’re sick of hearing it: use video. But this advice comes with truth behind it. According to a study conducted by Facebook, people gaze five times longer at videos than at photos on both Facebook and Instagram. In a world where it takes merely two seconds for people to look at content on their news feeds, a gaze that’s five times longer is great news for you. Videos stop users mid-scroll, and it’s been proven to be effective.

You have many options for video ads across different platforms. First, there are YouTube ads, which appear before or during a video. You can buy 3-second unskippable ads that appear before a video plays and a longer, in-stream skippable ad that typically appears during the video.

If YouTube doesn’t interest you (although it should because it’s currently the most popular video website), you can also advertise on Facebook using the Single Video ad format or Canvas format. Because Facebook owns Instagram, you can also easily advertise on the latter social media app using the rapidly growing Instagram Stories ad format.

RELATED:  How To Improve Your Business’s Online Presence

The smartphone is perhaps the most omnipresent object in people’s lives. The next time you’re at a public space, whether that’s at cafe, library, or park, take a look around you and see the amount of people who are on their phones. I guarantee you will see a few of them.

Because smartphones are like minicomputers, and because social media platforms have apps that make the social media experience better for mobile users, most people visit social media platforms on their smartphones, whether they’re at home, at work, or in line at Starbucks. If you want your ads to succeed on social media, optimize for mobile devices. First, turn your horizontal videos to vertical videos because the latter format fills phone screens better.  Second, add captions to all of your videos because most people watch videos with sound off. Third, use images that are bright and colourful, like the earlier ad example from Sugar Bear Hair, to stand out against a cluttered mobile news feed.

Speaking of video, if you plan to advertise on Instagram, add Instagram Stories to your strategy. Instagram offers a single video format that appears in the feed, but recently, Instagram also added Stories into its ad format options. Instagram created Stories to spite Snap Inc. for refusing to sell its app, Snapchat, to Facebook. As the Stories feature grew in popularity, Instagram launched Stories Ads, 15-second vertical video ads that appear between people’s Stories. Now, according to Facebook, Stories is the fastest growing product in Facebook history.

Because more people are using Stories, it’s an obvious place to advertise. The larger the audience in Stories, the greater the possibility for business growth.

What benefits do you gain from Stories other than a large audience? Facebook also stated that people on Instagram often engage with businesses. Currently, one-third of the most viewed Stories come from businesses. Facebook also found that businesses love Stories. Fifty per cent of businesses creates Instagram Stories in a typical month.

When done correctly, Instagram story ads hit a sweet spot. They are a full screen ad that blends in with user generated content. Since the format of the ad is the same as everything else the user sees it doesn’t disrupt their experience in the same as ads in the middle of a blog post might. As businesses are figuring out how to make Instagram Story Ads work for them, they’re finding that the full screen format makes their content look better, and hence gets better engagement.

RELATED:  The Importance of Social Media in Brand Building

Before social media advertising, customers couldn’t directly comment on an ad. They couldn’t directly comment under a billboard ad or a TV commercial, for example—there’s no way to do it. But with social media ads, customers can comment underneath the ad. Giving people the power to do such a thing can have both negative and positive outcomes. On the one hand, it gives you the opportunity to listen to critiques and adjust your strategies accordingly. On the other hand, it gives angry customers (or worse, internet trolls) a public space to complain.

To use an ad’s comments section to your advantage, respond to every negative comment. This shows customers that you are eager to deliver the best customer service, to right your wrongs, to maintain your brand’s integrity. It looks better to address an issue straightaway instead of ignoring it completely. Doing the latter will make your brand look negligent.

Unless you want your audience to ignore or fail to notice your repetitive ad, refresh your ads every two weeks to keep your audience interested.To refresh your ad, change your text copy, creative, ad format, or placement. Although refreshing your creatives is important, don’t refresh all of your creatives if you don’t have to. Refresh the ads with high frequency but low conversions and run the well-performing ads. If you’re receiving good returns from your ad, there’s no point changing it.

There isn’t a single solution to creating the best ad. In fact, one solution may work for one person but not for another. Finding the best strategy requires constant A/B testing. Test two ads with two different copies, images, or ad formats. Once you find the ad that outperforms the others, run it until the performance drops. Once it does, refresh the creative and run it again.

When you advertise on social media, don’t expect to become a millionaire overnight. Instead, expect hard work. Expect to constantly monitor your ad performance. Expect to refresh creatives. Expect to see some ads fail and some ads succeed.

Also, don’t expect to generate sales right away. Often, the person who sees your ad won’t purchase at that very moment. In fact, they might see your ad and ignore it the first time they see it. As they see your ad a few more times, they might convert. For that reason, have patience and perseverance. Retarget people who clicked on your ad but did not do your desired action. If they’re clicking on your ad, they’re obviously interested—they just need a little push.

Social media platforms such as Facebook or Instagram are not the same as the platforms Google and Bing. Because social media advertising audiences have low purchase intent unlike paid search audiences, it’s important to use different strategies. If you don’t have a strategy in mind, try the ones outlined here.

Anne Felicitas is the blog editor at AdvertiseMint, a Facebook advertising agency. In her spare time she likes to write poetry, binge watch shows on Netflix, and bond with her roommate’s cat.